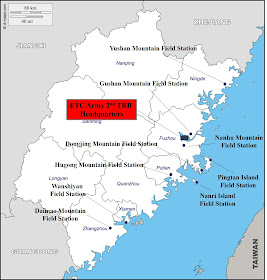 One should assume that any electronic transmission on, into, and out of Taiwan -- military or civilian – is subject to Chinese People's Liberation Army (PLA) signals intelligence (SIGINT) monitoring. The Eastern Theater Command (ETC) Army manages the PLA’s largest enterprise responsible for monitoring Taiwan’s command, control, communications, computers, intelligence, surveillance, and reconnaissance (C4ISR) networks.

Before 1985, the SIGINT enterprise opposite Taiwan was designated as the Fuzhou Military Region (FZMR) 3rd Bureau. After the FZMR's dissolution in 1985, the organization was incorporated into the Nanjing Military Region (NJMR) and designated as the NJMR 2nd Technical Reconnaissance Bureau (TRB). The NJMR was dissolved in January 2016, and supplanted by the ETC. The 2nd TRB (Unit 73630) has been reassigned to the ETC Army. It remains unknown if the unit retained its bureau (ju 局) designation. For the purposes of this discussion, the unit will be referred to as the ETC 2nd TRB.

Bureau leaders oversee headquarters, political, and logistics departments, as well as a number of division deputy and/or regiment leader grade offices (chu 处) and a training group in Fuzhou's northern outskirts, including an annex of the PLA University of Information Engineering. An office may consist of a number of sections (ke 科 ), including field stations. At least two subordinate offices are headquartered in Fuzhou’s Gulou District, adjacent to the PLA’s “Three Warfares Base” (Base 311). Base 311, which is responsible for strategic psychological operations and propaganda directed against Taiwan’s society, is likely reliant on the 2nd TRB for intelligence support. One of the Gulou District offices (Unit 73635) has been suspected of cyber espionage against Taiwan government networks. 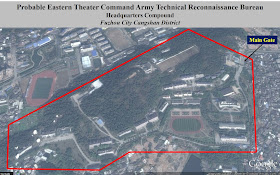 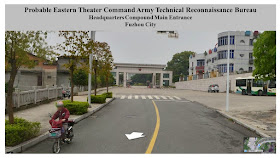 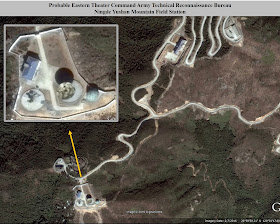 Gushan Mountain Field Station. The Gushan Field Station is located in Fuzhou's Jin'an District, specifically on Gushan Mountain, just to the east of the city. At an elevation of more than 800 meters, the field station is collocated with a site subordinate to the PLAAF 2nd TRB. Five geodesic domes can be seen on Google Earth imagery, along with a number of uncovered parabolic dish antennas (Geocoord: 26.064769, 119.397687) 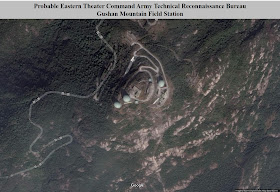 Dongjing Mountain Field Station. The Dongjing Field Station reportedly hosts elements of two ETC Army 2nd TRB offices (Fourth and Ninth) in Fuzhou (Fuqing) township of Donghang. The site has been in operation since the 1960s if not earlier (for English reporting, see here and here). The Dongjing Mountain facility also hosts elements of the PLAAF 4th Radar Brigade and the Xiamen ETC Army Electronic Countermeasures Regiment. Six radomes and at least nine parabolic antennas are visible on Google Earth. An additional radome can be seen at an annex about one kilometer to the southeast (Geocoord: 25.417109, 119.635307). 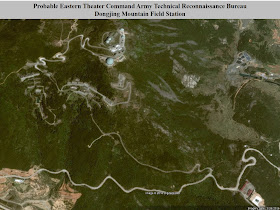 Junshan Mountain Field Station. The ETC Army 2nd TRB Fourth Office appears to maintain a collection activity on Junshan Mountain at the eastern end of Pingtan Island. At an elevation of 400 meters, the station is possibly associated with the Fourth Office and is collocated with a battalion under the PLAAF 4th Radar Brigade and a UI Navy unit. At least five geodesic domes can be seen on Google Earth, along with one probable air surveillance radar (Geocoord: 25.600175, 119.814155). 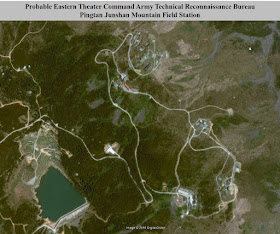 Nanhu Mountain Field Station. A probable 2nd TRB field station was established on Nanhu Mountain in the township of Dongzhang sometime between 2011 and 2014. The site consists of a single radome and a possible admin/operations building less than a kilometer to the northwest. At an elevation of 800 meters, the field station may be subordinate to the Ninth Office, which is headquartered in the Fuzhou City (Fuqing) township of Longtian (Geocoord: 25.742774, 119.237122). 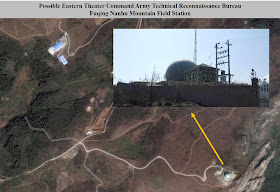 Hugong Mountain Field Station. Another field station probably linked with the 2nd TRB Fourth Office is located on Putian's Hugong Mountain. A 25-meter geodesic dome can be seen on Google Earth imagery, along with a UI antenna and admin/ops area (Geocoord: 25.359888, 119.007907). 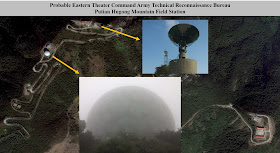 Nanri Island Detachment. An ETC Army 2nd TRB Fourth Office detachment reportedly is stationed in the village of Dachikou on Putian's Nanri Island. In that area, a single 4-meter radome and possible support building are visible on Google Earth (Geocoord: 25.174894, 119.531909). 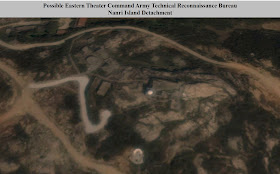 Wanshiyan Field Station. A relatively new field station appears to have established on Xiamen's Wanshiyan community (Dongping Mountain) after 2005. Site construction continued through 2012. The site consists of four geodesic domes and at least two possible admin/operations areas. A associated compound is on Yundingyan Mountain (Xiguling), about 4.5 kilometers to the east. The latter facility at Xiguling appears to support the PLAN's 2nd TRB (Geocoord: 24.451641, 118.111547). 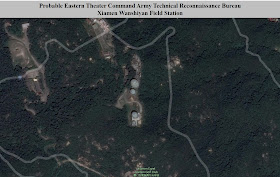 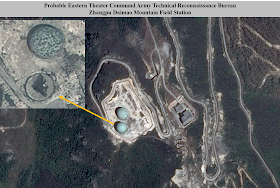 Taiwan Matters to America at 09:22