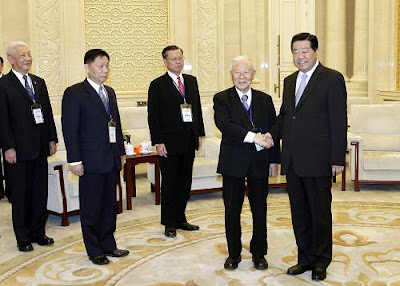 Yesterday’s China Times carried an interesting article regarding growing U.S. and Ma administration wariness over exchanges between retired military officers on both sides of the Taiwan Strait (click here for an English version).

Indeed, the Chinese People’s Liberation Army (PLA) appears to be courting a new partner. As authorities in Beijing keep military-to-military exchanges with the United States in a deep freeze in protest over U.S. arms sales, formalized contacts between “retired” PLA military officers and counterparts on Taiwan have rapidly filled the vacuum. The PLA, using the so-called “Sanya Initiative” as a vehicle, seems to have learned just how effective retired senior U.S. military officers can be in influencing policymakers in Washington.

Since November 2009, the PLA has placed retired military officer exchanges on the front burner as an integral component of a broader influence operations campaign on Taiwan. The target appears to be a key faction within the KMT representing veterans and their families, perhaps as well as Taiwan's defense establishment via informal links between retired and active duty general and flag officers. The recent media reporting from Taiwan indicates that President Ma Ying-jeou and his administration is casting a leery eye over the brisk pace of exchanges over the last several months.

Retired military officers from the Republic of China (ROC) on Taiwan have visited birthplaces and extended family members in China since the 1980s. However, the PLA’s direct leveraging of senior retired military officers on Taiwan for political purposes seems to be a relatively new phenomenon. During cross-Strait academic conferences in November 2009, Chinese interlocutors presumably linked with PLA planners pro-offered the concept of retired military officer exchanges as an intermediate step toward establishing a “military confidence building mechanism.” In November 2009, two such meetings took place, one during the Sunzi Conference in Beijing and another in Taipei, hosted by the Pacific Cultural Foundation. During these exchanges, retired PLA officers were alleged to have cited the Ma administration as pursuing “peaceful independence.”

While Taipei may view confidence building as a means to reduce the chances of misunderstandings or accidents that could lead toward conflict, Beijing views “confidence building” as limiting Taiwan’s future international options. Or perhaps even to lock the KMT and the Ma administration into Beijing’s definition of “One China.”

The April visits were followed by a larger two-day “Zhongshan Whampoa Cross-Strait Relations Forum" [中山·黄埔·两岸情论坛] in May 2010 in Taipei’s Sunworld Dynasty Hotel. The event, cast as a reunion of Whampoa Military Academy alumni and their descendants, was attended by over 140 retired officers and other dignitaries, including Zhou Bingde, niece of Zhou Enlai.

In his opening remarks, KMT Honorary Chairman Wu Po-hsiung highlighted the importance of military confidence-building measures (CBMs) as a precursor to a cross-Strait peace agreement. Noting the difficulties in formal political dialogue, Wu suggested that sensitive political and military issues could be addressed through academic channels. Former Deputy Minister of Defense Wang Wen-hsieh (王文燮; b. Shandong, 1932) was quoted as saying “as long as political issues are solved, mainland China will withdraw all its missiles aimed at Taiwan.” Wu Po-hsiung paid homage to the former site of the Whampoa Military Academy during a visit to Guangdong in July 2010.

Golfing for Peace in the People’s Republic

Where Is It All Leading?

On the surface, exchanges between retired military officers appear harmless. Generally, general and flag rank officers have a three year "cooling off" period after retirement before legally able to visit China. It’s natural for aging or bored soldiers, sailors, and airmen to want to come to closure with an old enemy, or perhaps make some contribution to a larger cause. The general and flag officers participating in these cross-Strait exchanges have dedicated much of their lives to defend the ROC against Communist Chinese aggression. At the personal level, participation in these exchanges indicates that the Civil War is over, at least for them.

However, there may be more to the story. One could also conclude that the PLA has launched an ambitious influence operations campaign to woo an powerful interest group within the KMT as a means to promote its “peaceful development” of cross-Strait relations. Retired military officers form a relatively significant interest group within the KMT - the Huang Fu Hsing Faction [黄复兴党部]. Retired Army Generals Hsu Li-nung, Li Chen-lin, and Wang Wen-hsieh are former Huang Fu Hsing chairmen. In May 2010, President Ma Ying-jeou publicly called upon new Huang Fu Hsing Chairman King En-chin [金恩慶; b. 1943, Jiangxi] to maintain loyalty to the KMT in the run-up to the November 2010 special municipality elections. China’s Whampoa Association Chairman, Zhu Jingguang, also heads the China Council for the Promotion of Peaceful National Reunification (CCPPR). In fact, the two organizations share the same address and phone number.

In short, while participants from Taiwan may have no malign intent, the same can't be said for the China side. The participation and presence of Xiong Guangkai by itself should give a hint. Xiong serves as Chairman, China Institute for International Strategic Studies (CIISS). CIISS is subordinate to the PLA General Staff Department (GSD) Second Department (intelligence). CIISS serve as an interface between the military intelligence establishment, experts in Taiwan and elsewhere, with regular interactions both at home and abroad."Xiong served as head of the PLA's intelligence community before moving to direct CIISS. As a member of the Taiwan Affairs Leading Group, Xiong also has been a key player in leading the charge for Taiwan's annexation. LTG (ret) Xiong Guangkai also is former deputy chief of the General Staff of the People's Liberation Army.

Confidence building measures (CBMs), such as hotlines, transparency initiatives, and military exchanges, are intended to reduce tensions and increase trust between two or more parties. CBMs are also intended to reduce the risks of miscalculations and accidents that could escalate into armed conflict. However, the PRC’s continued reliance on military instruments of national power to dissuade and coerce Taiwan into a political settlement on its terms is likely to limit the degree of confidence that could be built. Other limiting factors include asymmetries in transparency due to differing political systems, and internal political divisions in Beijing and Taipei.

“Political trust” and CBMs have become themes of cross-Strait and other international academic exchanges, albeit at a much more measure pace than that the retired military officer engagements. At a conference in Taipei in November 2009, Taiwanese scholars outlined the difficulties associated with military CBMs without political trust.

Posted by Taiwan Matters to America at 09:56

Nice post. This is not a good development. Especially how it helps China gain connections to the Taiwan defense establishment.

Thanks, Islander. Best thing is what China Times and others have done, which is to report on it and make sure the public knows who's involved. It also would be good to know who's financing these exchanges. I'm pretty skeptical that participants would be paying for plane tickets and green fees on their own.

About The Taiwan Link

Taiwan Matters to America
The Taiwan Link offers a Washington D.C-based perspective on the most relevant Taiwan political, economic, and military trends.